Biodiversity in the Robson Valley 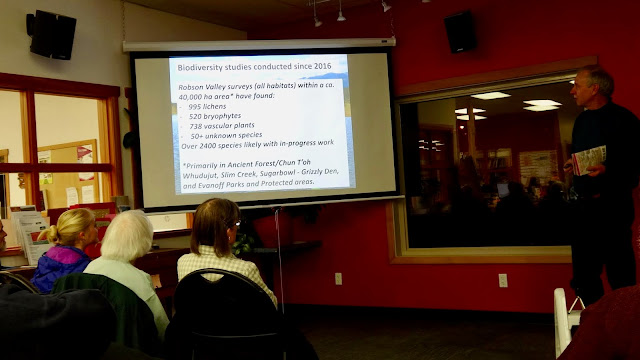 Last night we attended an engrossing talk on Biodiversity in the Robson Valley by Darwyn Coxson, a professor from the University of Northern BC, that was presented by the McBride Museum and Library.  While most of us that live here know the Robson Valley is a special place, I think the fifty people who attended were still blown away at just how diverse our environment really is.
We have plants growing here that are very rare and only found in small isolated pockets in other places in the world.  He gave an example of a fungus that is only found in the Himalayas, a section of Africa, and a few scattered places in Asia.  Its mystifying how the spore of that plant found its way to the Robson Valley.  Coxson gave several examples of such sparsely scattered plants that are found here, as well as species of plants that have been discovered here that are unknown to science.
He spent a lot of time speaking about the reason for these rare ecosystems:   the unique shape of the valley and the constant flow of water flowing underground downslope, largely from the snowmelt, but augmented by frequent rain, that enable these rare plants to grow here.  In the Ancient Forest which contains the giant Red Cedar trees (some of which are probably 1,500 years old) they have found no evidence that there has ever been a forest fire there.
Computer simulations have shown that the biggest threat to these rare ecosystems from climate change will be the lack of snow, which would disrupt the year round flow of water.
It was a fascinating and enlightening evening.

In answer to the comment below:
The snow that falls through all the months of the winter, does not melt, but piles up on the ridge above the valley.  Then when the temperatures warm in the spring, that mass of snow slowly melts and trickles underground to feed the trees and plants downslope.  The water from that melt lasts well into summer, and is augmented by all of the rain and showers.
If in the future it warms and just rains during the winter, all of that water will be lost to the plants which will not use it during the winter.  It is the lack of all the slow melting snow during the spring and summer which will cause havoc in the temperate rainforest.