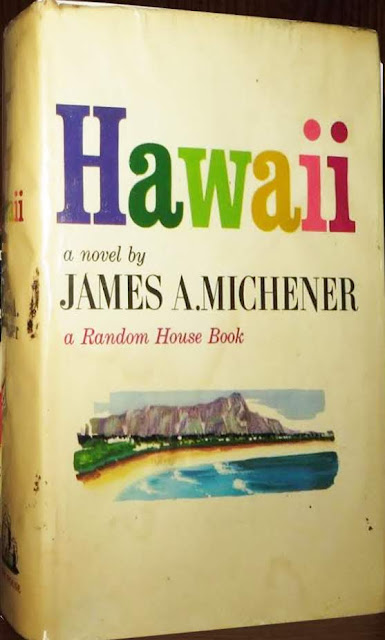 For September, the McBride Library book club had us re-read something we had read in the past to see how our perceptions of the book might have changed.  I chose to re-read James Q Michener’s Hawaii:

In 1969 I spent two and a half months on the Big Island of Hawaii.  It was quite a sensual awakening for a boy that grew up among the corn fields of Indiana.  I was gobsmacked by the intense colors of flowers and the greens of the lush tropical plants, the volcanic topography, and the blues of the Pacific Ocean.  It opened up a great sensuality in me that I carried forth for the rest of my life.
That time I spent in Hawaii also created in me an immense interest in the Hawaiian Islands and so when I later ran across Mitchener’s epic novel, I eagerly set forth to devour it.
Rereading Hawaii was a treat.  During my initial read of the novel I remember with fondness the long first chapter in which Mitchener delves into the 40 million year birth of the islands from their conception as volcanic vents on the sea floor, slowly building with lava until they broke the Pacific’s surface, forming islands,  one of which grew five miles in elevation from the sea floor to the top of its volcanic peak.
Then once established those isolated chunks of hardened lava rock, slowly evolved to be able to support the plants and later, insects and bird life, all of which miraculously found their way across the Pacific to the Hawaiian Islands.
The second section of the book told of how some of the natives of Bora Bora blindly set out on large sea-going canoes, packed with everything they might need to survive on some unknown shore, onto the unchartered immensity of the Pacific and after more than a month, managed to hit the Islands of Hawaii, there they were able to survive and establish a home in the middle of the vast Pacific.
As was his style, Mitchener populates the chapters of Hawaii with memorable characters, drama, and cultural and religious practices.
The third section the novel follows Abner, a haughty, fundamentalist Christian from Massachusetts, who as a missionary, goes to Hawaii with his wife of a week, to save the natives.  After a horrible six month voyage on a sailing vessel, he and the other missionaries arrived at the islands.  There Abner, forgetting love and understanding, uses blind determination in an attempt to turn the native Hawaiians into Christians in all aspects of their lives.   While he succeeded in some things, in the end his racist prejudice toward the Hawaiians condemns him to a wasted life.
Michener then gives the reader background on two different ethnic Chinese groups and tells how a couple from each of these two differing Chinese cultures join together and are transported to Hawaii to work on sugar plantations.  But once there the couple are clever enough to get work as cooks for a prominent wealthy white family and are thus able to make money on the side through other enterprises.
When the husband gets leprosy, they leave their children with a native Hawaiian family, and the wife joins her diseased husband on a leper colony island where she cares for him and other lepers.  After many years of struggle, the husband dies and the wife returns to find she is no longer considered “mother” by her children, but her descendants thrive.
Thus Michener continues in the novel, creating stories around the various waves of ethnic groups that end up in Hawaii, often imported to supply labor for the large sugar and pineapple farms.  Their vast cultural and racial differences created conflicts, which they are foto deal with and they find the strategies that help them to survive and thrive.  The novel is full of anthropology, sociology, as well as history.
The underlying themes that Michener has stitched throughout the book is racism, bigotry, and prejudice.   The novel shows how throughout its history those negative characteristics were slowly overcome or diminished by intermarriage, economic realities, and law.
I thoroughly enjoyed rereading Hawaii, and rediscovering those things that impressed me so much during my initial reading of the novel.