What's Wrong With The Headlights? 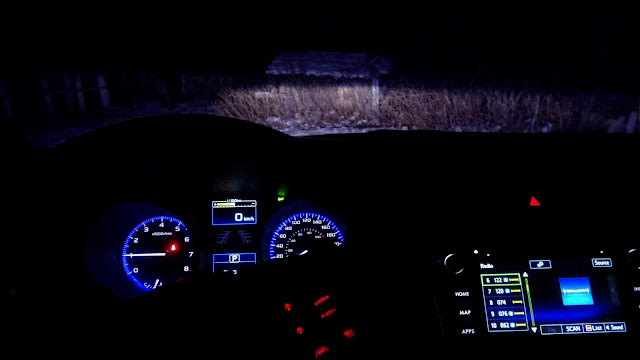 Last night after our music jam at the library, I was dropping Ingrid off at her place.  When we arrived, I took off my 1-powered reading glasses which wear when I drive, and put them in the cup holder on the gearshift console between the seats.  I then got out and opened the hatchback so Ingrid could get her guitar out.
When she was in the house, I backed the car so I could turn around.  I then remembered my reading glasses, so I reached over grabbed the glasses in the cup holder and put them on.  As I was driving up the hill, it suddenly struck me that my headlights were really dim.  Normally their light is crisp and bright.  What’s going on, I wondered.  Did I inadvertently change the setting?  I checked, but it was the same.
It seemed like the plastic shield over the headlights were dirty and diminishing the light, but since it was below freezing and their weren’t any puddles, how could the shields suddenly get dirty.  It just didn’t make any sense.   I continued driving down the palely lit country road.
In my frustration I happened to raise my head, and noticed that when I did, the headlights seemed to become brighter.  I raised and lowered my head, sure enough that made the headlights brighter.  Suddenly it struck me what was wrong.
When I reached over in the dark to grab my reading glasses, my hand instead grabbed Joan’s sunglasses, which were also in the cupholder.   I hadn’t noticed the change when I put them on, except that suddenly by headlights were very dim.
I took her glasses off, put mine on, and happy with the newly found power of the headlights, continued my drive home.


You can see my paintings at:  davidmarchant.ca
Posted by Life in BC's Robson Valley at 10:36