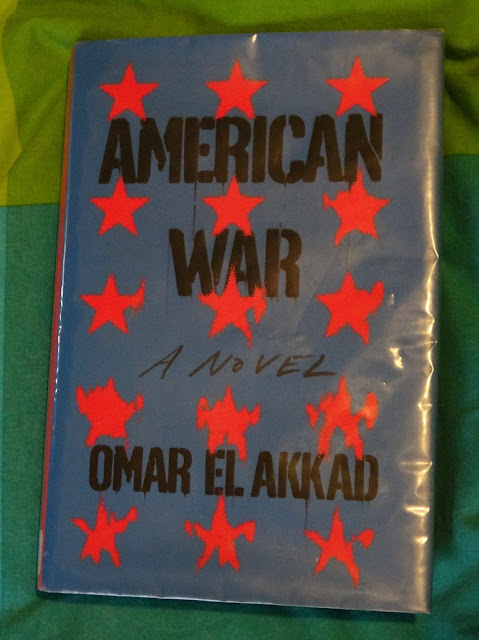 I was doubly sad that I missed our last book club gathering at the library, first because I like the get together, and secondly because I had forced myself to read through a book I really didn’t enjoy which had fit last month’s theme.   Because I missed the meeting I didn’t know what this month’s reading theme was going to be, so I was anxious to get to the library to see what November’s theme was and check over what books they had put out to match the new theme.
The morning before I went to the library, I discovered the new term “Cli-Fi” referring to futuristic novels involving climate change.  That sounded like something I might like to try.
Upon arriving at the library I misread what the new theme was.  I thought it was “Exciting” books (the theme was actually “Books you are excited to read’).  With “Exciting” in mind I started to peruse through the books that had been set out and discovered American War.  Reading the sleeve, it looked like it was also an example of Cli-Fi, so I chose it.
The story is set between 2074 and 2095 in what used to be the southern United States.  In 2074 the “Second Civil War” had begun, fragmenting the country into four warring zones:  the United States (whose capital has been moved to Columbus, Ohio, due to sea level rise that inundated Washington, DC), secondly, the Free Southern State (composed of what used to be Mississippi, Alabama, Georgia, and a sliver of Florida that’s still above the ocean), the third area was the South Carolina Quarantine Zone (the former state has been walled off because of a deadly germ warfare attack, whose symptoms still linger), and fourthly,  the Mexican Protectorate (made up of areas in former southwestern US, that were now ruled by Mexico).
All of these zones (except for the Quarantined area) are full of regular military and guerrilla gangs at attack with each other.  Huge swaths of the Free Southern State lay in ruin due to sea level rise, environmental degradation, and climate change.  A blockade by the US, limits relief goods and aid from the Red Crescent and the Bouazizi Union (an Empire in the Middle East) to the Free Southern State.
Growing up in this Garden of Evil, the Free Southern State, is the book’s main character Sarat, whose father is almost immediately killed when he has himself smuggled into the US seeking work, so he can provide for family.  The destitute family then ends up in a Southern refugee camp run by the Red Crescent.
After years in the camp, the teenage Sarat is taken under wing of a refined gentlemen, an agent of the Bouazizi Empire who seeks potential suicide bombers to use against the US.  Although Sarat isn’t interested in blowing herself up, he “educates” her.  When the refugee camp is attacked by US forces, who massacre most refugees including her mother,  Sarat decides to dedicates herself to a life of killing US soldiers.
She achieves some major successes in this goal, until she is rounded up, imprisoned, tortured, and seven years later, when the South surrenders, she is released.  By the time of her freedom, Sarat is a hobbling basket case, but it does not prevent her from continuing her revenge.
This is not an uplifting book and it wasn’t very enjoyable to read.  Because I thought the book club was books that were  “Exciting,” I kept expecting for that to happen, but instead all I got was drudgery.  There was murder, torture, and germ warfare, in the gloomy setting of a environmentally destroyed world.
I read in hopes that the main character would eventually loosen the grip of revenge and have some kind of redemption, and if not her maybe some other character, but there was very little if any human kindness to be had.
It is always interesting to read other people’s view of what life might be like in the future, but I found many of this novel’s future implausible.  I couldn’t buy the emergence of a powerful Muslim Empire, because their whole history is fighting among themselves, and no where was China mentioned, and to me that seems like an obvious power broker of the future.
As far as excitement, this month’s book club’s theme, American War failed miserably.  I didn’t find it exciting at all, which was why I thought I was reading it.  I found the experience a depressing waste of my time.
You can view my paintings:  davidmarchant.ca