The River by James Alexander Thom 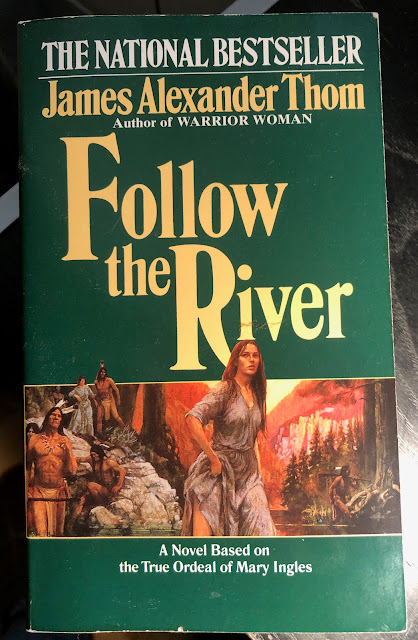 This 1981 novel is based on a true story that began in 1755 in a small pioneer settlement in the frontier of Virginia.  Mary Ingles and her two young sons were outside their log cabin, when their settlement was attacked by a band of Indians who brutally killed Mary’s mother, her infant niece, and other residents in the hamlet.  Mary’s husband and brother who were some distance away working in a field, didn’t even know about the attack.

Mary, her two boys and sister-in-law were abducted by the natives; forced to travel with them as they made their escape.  Mary, in hysterics, who was pregnant and near her delivery date, was put on a horse with one of her sons as the party traversed through the rough mountainous wilderness for days, then weeks as they headed for the tribes home.  She gave birth to a girl along the way.  The Indians treated her with understanding during the birthing and the ordeal of their travel, compared with the brutality they had demonstrated during the attack.

They seemed to gain respect for Mary, after the brave and unflinching way she gave birth and the dignity she tried to maintain despite her fear.  The head of the raiding party seem to show her special attention.

On the 800 mile wilderness journey to the Indian village, the group followed various rivers, finally traveling a long distance beside what is now the Ohio River.  Mary made herself try to remember the landmarks along the way, thinking they would be the only way she might ever find her way home to her husband.

Once they arrived at the Indian village, Mary strove to keep her dignity and seemed to maintain the special status she had been given my the warrior leader.  Her two boys adapted quickly and seemed to thrive in their new life with the Indians.  Her baby was often cared for by a young woman who had recently lost her baby.  There were several other captive whites in the village, including an older Dutch woman named Ghetel.  Also there were two French traders that lived with tribe.

Mary rejected a chance to live with the warrior leader and was then given to the French traders and made to make clothing which they sold.  At one point she and Ghetel were taken by the French traders to collect salt and Mary convinced Ghetel it was their chance to make an escape back to Mary’s pioneer home.  An escape meant Mary would leave her two boys, who seemed to like Indian life, and her infant daughter who was loved by the young Indian maiden and would never survive the trip back to the pioneer settlement.

Mary and Ghetel made their escape with only a hatchet, blankets, and the clothes on their backs, into the wilderness.  The whole latter half of the novel then concentrates on the epic struggle the two women had to endure in their attempt to get back to Mary’s husband.  Their trip was horrific, eating the roots of plants once nuts and berries disappeared when winter arrived.  Eventually they were without blankets and clothing due to mishaps and wear.  Even cannibalism reared its ugly head as they starving women struggled to stay alive.

Mary often had to guess which rivers and creeks to follow.  They often had to hike miles up the tributaries in order to cross them then backtrack to get back to the river they were following.

Follow the River is a fascinating account of the terrible ordeal that the two women undertook, and their unwavering determination and will to survive.  It is a true story that will amaze the reader.