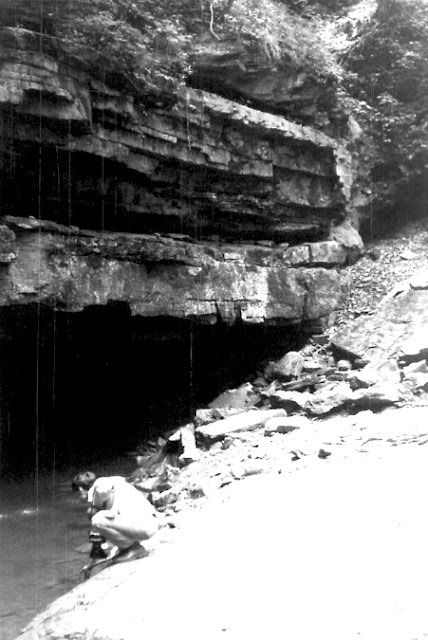 When we were kids we were taken several times to Mammoth Cave National Park in Kentucky.  It was exciting to be camping and to go on the daylong tour of Mammoth Cave, seeing its stalactites, stalagmites, and the other limestone formations that had developed over thousands of years.  Perhaps the most memorable moment on the tour was when the tour guide turned off all of the lights and we sat there in TOTAL silence and darkness.

In our late teens, my cousin Dan and I returned to Mammoth Cave several times to camp and go on the cave tours.  I think it was probably around 1972 that my cousin Dan started doing a lot of spelunking with friends who were also interested in caving.  They organized caving expeditions to some rather unknown caves they found out about in Kentucky.

A few times I was able to join in on their explorations.  It was alway a strange feeling to be in a cave, lying on your belly, trying to crawl through the mud of a low narrow passageway and suddenly think about all of the tons and tons of rock lying between you and the outside world.

Most of those caving trips took place in rather wild areas of Kentucky.  I remember on one of our excursions we were traveling to a cave in someone’s mini-bus.  The vehicle was slowly bumping up a weed-grown, unused trail on the side of a hill.   As it climbed the steep trail narrowed.  I was sitting in the passenger side when the bus began to get closer and closer to the steep drop-off at the edge of the hill.  It was at this point we stopped and the driver suggested that I open the door and check how close we were to the edge.

I opened the door and put my foot down through the high weeds.  My foot went down and further down.  The truck was literally resting just on the edge of a cliff.  I got back in and we all kept our fingers crossed as the bus slowly, with a lot of braking, inched its way back down the slope.

The group set up camp across from a cemetery. The area was forested mountainous country with steep valleys.  There was a railway nearby to where we camped.  Looking down the track we could see that it traveled over a trestle that spanned a deep canyon and then beyond that went through a tunnel.

In the group was a family with a couple of kids.  The father and the kids wanted to explore the railroad trestle and went down and started walking down the track.  The idea sounded crazy and dangerous to me, but I went along.  We had gotten out on the trestle a bit, when I heard a train.  I tried to tell everyone without showing my panic, to get off of the trestle and return to flat land quickly.  Luckily, everyone made it back before the train rounded the corner.

Looking back now on those caving trips, I realize that it wasn’t being in the caves that I remember, but the things that happened outside.  I do vividly remember the entrance of one of the caves we explored, because a creek about one and a half foot deep came right out of the cave’s mouth.  We had to wade through the water to get into the cave.  Once inside the cave the creek channel was off to the side and we could walk on firmament.

The photo above shows my cousin Dan, checking out creek coming out of a cave.  Below, walking the trestle before the train came.

I have another caving story for tomorrow. 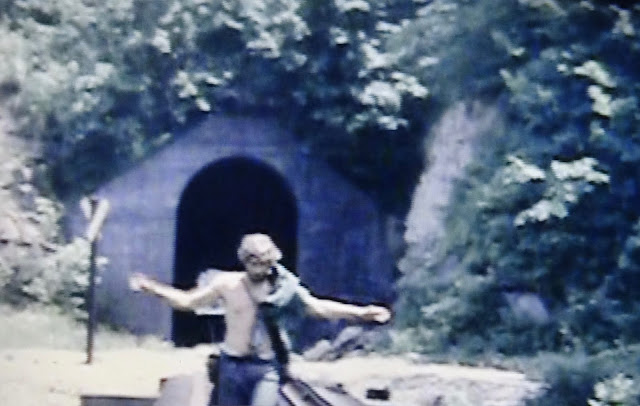