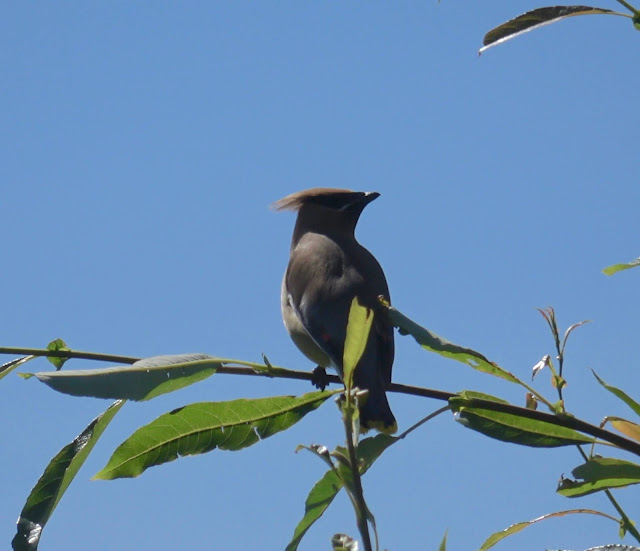 Yesterday on our walk there was a group of waxwings flying around.  Whenever I see a waxwing I think of something that happened to me long ago when I was herding goats.  Here is the story:

In 1996, I had a herd of angora goats, and a lot of very poor fences, so I couldn’t really let the goats roam freely around in the pasture.  What I ended up doing was to play shepherd and herd my goats every day after I got home from work.  It was something I kind of enjoyed, because it gave me time to unwind after a day at the office.
I would walk the goats down to the pasture behind my pond and let them stuff themselves with whatever vegetation they desired.  I would just stand around with my whip, which I would snap if some goat was acting up.
One afternoon as I was standing beside a grove of alder trees, I happened to glance over and spotted a nest of young cedar waxwings.  They were getting so big, they were taking up all the space in the nest, so I realized that they would probably be leaving the nest very soon.  Always eager to take a good photo I filed the idea of returning with my camera into the back of my mind to later retrieve.
Unfortunately, I failed to remember the nest until a few days later.  When I did finally remember, I immediately grabbed my camera and headed down to the alder trees.  When I got close to where I had seen the nest, I quietly, took off my regular lens, and attached the telephoto lens so I wouldn’t have to get really close to the young birds in the nest.
The camera being ready, I crouched low and slowly and quietly began to tiptoe up to where the nest was.  When I got to where I figured I was close enough for the shot, I swung my camera into place in front of my eye, ready to snap the picture.  What I saw in my viewfinder was an empty nest.  The waxwings had already left.  Damn, I had left the shot too long, and now I had missed it.
In frustration and disappointment, I stepped back from the tree.  At that point my eyes happened to raise up from the nest and there the young waxwings stood on a branch, straight and still as statues, all in a line, trying to blend in to the scenery.  I aimed my camera and got, not the shot I had originally came for, but one that was more interesting. 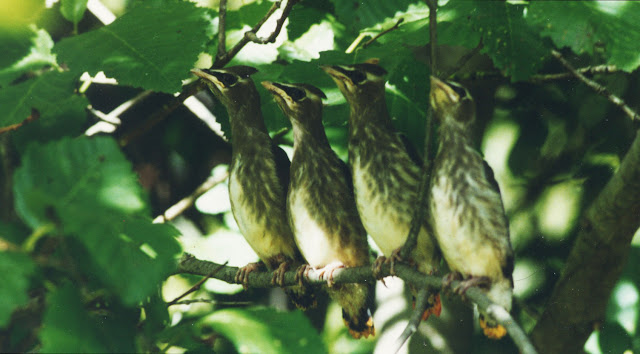