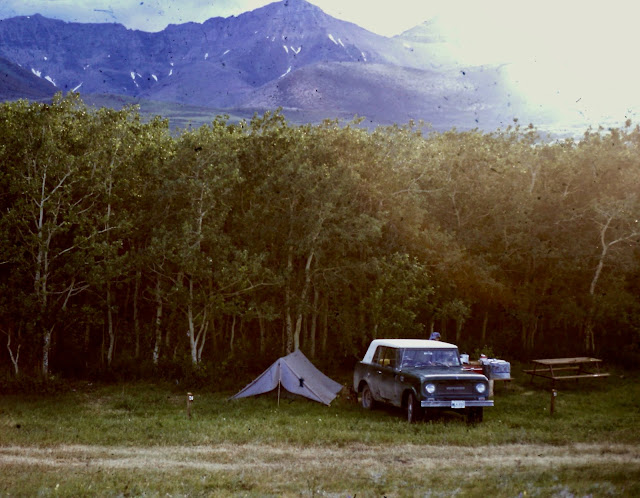 On August 8th I blogged about my first car:  a new 1969 MG Midget, that was great fun to drive.  A few years after getting it, I was working as a Conscientious Objector in a Goodwill Store being paid minimum wage which was $1.65/hr (and only worked 35 hours a week).  The MG was continually breaking down and costing me more than I could afford to spend constantly getting it repaired.  It got to be such a bad situation that I decided to sell it and get something that was reliable to drive.
My aunt’s parents, a retired couple who lived up the road, drove an International Scout that seemed very rugged and reliable, and when I happened upon a Scout, Model 800 at a used car dealer, I bought it.  While it was a couple of years older than my MG had been, it was a whole lot more dependable.
Scouts were a pre-curser to what decades later became known at SUV’s.  It had 4-wheel drive and was suited for both rough terrain and regular everyday driving.  The one I had was pretty unique, having what I think was a fiberglass top, which could be easily removed.  The back seat was also easy to take out if you needed more space for hauling things.  It did not have seatbelts, but I installed some for the two bucket front seats, because I was concerned about safety.
It was a great vehicle.  I discovered that while at a Drive In movie theater with my girlfriend, with the back seat removed, you could lay down in the back, on your back, with your head by the rear of the vehicle, looking straight up you could watch the movie reflected in the slanted rear window above you.
My wife and I hauled all of our possessions in the Scout pulling a utility trailer, when we immigrated to Canada.  Of course, the Scout was a wonderful vehicle to have in Canada; driving through the snow or up a mountain.
During the three years when I was teaching in a one-room school in an isolated fly-in lumber camp, the Scout had to remain unused during the winter months, parked in the continuing snow  (photo below), but after all of those months of being parked and unused in the cold, it usually didn’t take much to start it up again.
We drove that Scout until 1976, when it too was beginning to have a lot of mechanical problems and  we began looking for a newer vehicle.   That next car was also a Scout, a sporty looking 1974 Scout II. 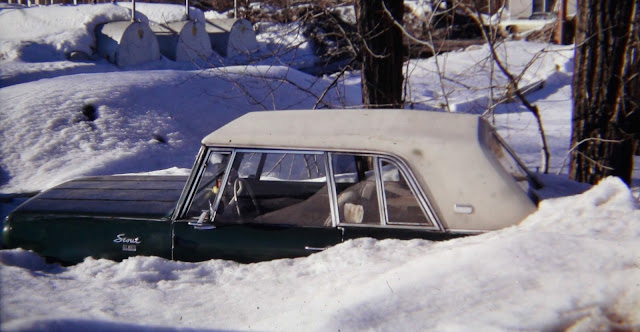