That Crazy Dog is IN the Tree 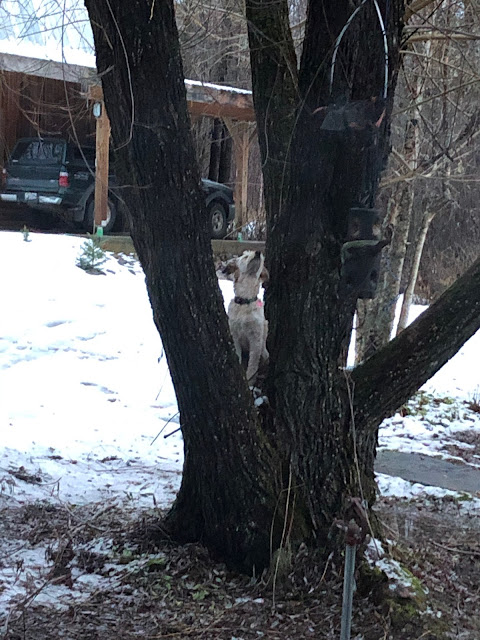 In previous blogs I have mentioned how squirrel-obsessed our dog Kona is.  Yesterday I glanced out the window and discovered her quest for squirrels had literally risen to a new level:  She had actually climbed into a willow tree to get closer her prey.

I can hardly wait to see what she will be doing next to satisfy her obsession.

Posted by Life in BC's Robson Valley at 09:05 No comments: 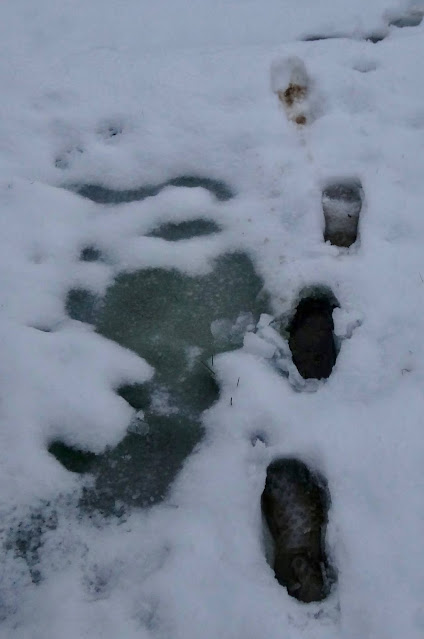 I can’t think of anything messier than the kind of weather we have today.  We were supposed to get a big snow storm, but instead got a mixture of snow and rain (a lot more rain than snow).  Our already water-saturated ground is now even worse.   The ground is messy and so is what is coming down from the sky.

It would be a good day to stay inside, but Kona is having none of that and as a result, we will get none of that.  She is driving us crazy trying to get us out there.

You can view my paintings:  davidmarchant2.ca

Posted by Life in BC's Robson Valley at 09:51 No comments: 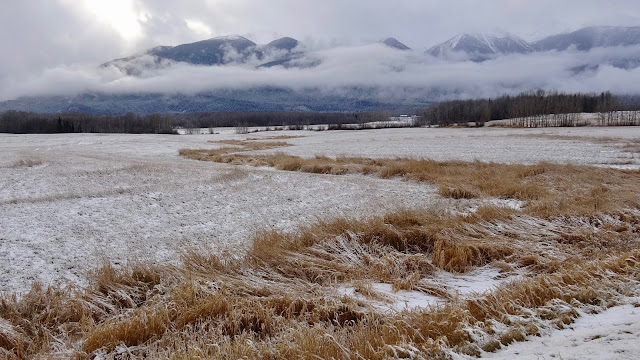 While I am scanning the environment every day looking for something interesting or beautiful to photograph, often there isn’t much inspiration to be seen.  That was the case yesterday, it was a gray overcast day with a lot of low clouds.  I was able to find a bit of color in these weeds that snaked through the fields, so that is all I have to offer on today’s blog. 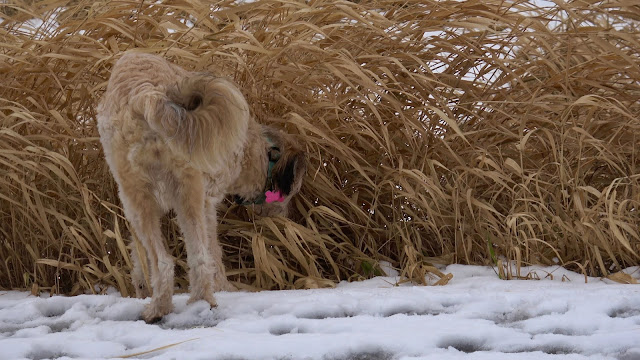 Whenever we walk Kona down a road or runway lined with weeds, she stands very still as she scours the weeds for a scent of a mouse, suddenly, like a coyote, she pounces headlong into the wall of weeds, then muzzles around in the snow or mulch, then just as quickly, Kona jumps back, and proceeds down the road to the next mouse hideout.

I don’t have any idea what she would do if she actually caught a mouse, but just the act of hunting sure keeps her entertained.

During the darkness of our midnight walks, she sometimes senses a deer and with her hackles up slowly proceeds forward barking furiously.  When I call her back, she is always more than happy to oblige and retreat, not really wanting to get any closer to the unseen intruder. 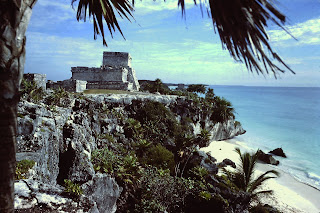 One of the places that stood out the most for me on my 1987 trip to Mexico was Tulum and the small Mayan “God of Winds Temple” that stood overlooking the amazingly turquoise waters of the Caribbean Sea.  It was an idyllic tropical location with its palm trees, rock cliffs, and white sand beaches.

Whenever I thought about the Maya, I always pictured the pyramids, built in the jungles of Mexico and Guatemala, so I was surprised when I got to the seaside Tulum site.  The Mayan where great traders and Tulum was their Caribbean port city.

Back in 1987 when I travelled what is now called “The Mayan Trail” which includes many of the Mayan Pyramid locations, I did so on a regular bus, not a tourist bus.  I overnighted in the town of Tulum, where my $7.00 room was very much less than luxurious.  The old proprietor showed me how to turn on the ceiling fan by touching the ends of the two live wires that were sticking out of the wall.

That night I ate in the local restaurant just down the road and had some very tasty shrimp in a spicy garlic sauce.  The eatery looked like a dive from the outside, but the dish was quite attractive, garnished with a twisted slice of orange, a radish cut like a flower, and a quartered slice of lime.  The meal cost me $3.70 (US).

The Archeological site didn’t open until 8:00 AM and because I had been waken up by a barking dog at 5:00, I had to move slow in order to kill some time so I wouldn’t get there before then.  I took a bus but was a bit dismayed when I was dropped off at an intersection of the Highway and a local road.  I assumed that the site was down the road so began walking.  It was not a very scenic hike; flat with high brush obscuring everything but the sky.  There were some workers cutting weeds with machetes along the road, and I greeted them with “Buenos dias” to display my great fluency in Spanish.

After about a kilometer’s hike, I got to the site where there were five other people waiting to get in.  Once through the gate, I walked around to see the different ruins, then suddenly the peace was interrupted by the sound of diesel engines and shortly thereafter I was surrounded by 100’s of people:  The tourist buses had arrived and unloaded.

Fortunately by that time I had pretty much seen everything there was to see.

I just checked Google Earth to see what Tulum looks like today, and was amazed at how much development has occurred in the thirty years since I had been there.  I know that Mexico has recently put a lot of money into the pushing tourism along the “Mayan Trail”.

Thinking back, it is the scene you see in the photo that really sticks in my mind.

Posted by Life in BC's Robson Valley at 10:31 No comments: 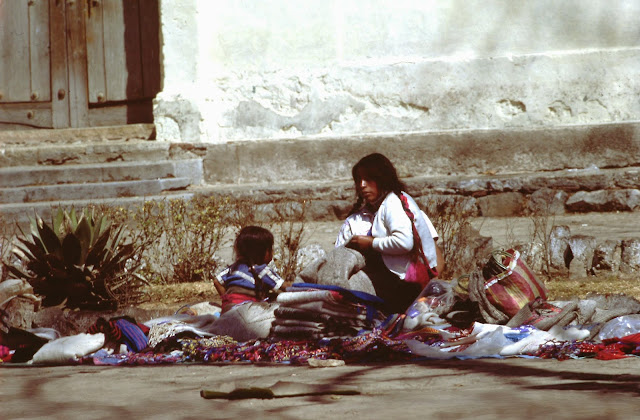 I didn’t really have anything to blog about this morning, so I thought I would look through some of my slides to see if I could find something.  I came upon this photo that I took in 1987 of one of the many street vendors in San Cristobal de las Casas in the Chiapas area of Mexico.  This is one of the thousands of vendors that could be seen with their wares displayed on blankets spread out on sidewalks throughout Mexico and Guatemala.

A lot of them catered to the tourist trade and sold colorful woven garments and bags.  Others who seemed poorer had little stacks of sticks of chewing gum to sell.  While it made an exotic scene for me, it was serious business for those people, who depended upon their sales for their livelihood.

Now with Covid causing so much havoc to so many businesses around the world, I can’t help but wonder about what is happening to people like this woman, who lived so low on the economic scale.  The tourists have disappeared as travel is restricted and curtailed.  With so many of them selling the same tourist-oriented products, how are they able to survive today?

Posted by Life in BC's Robson Valley at 10:53 No comments:

The Rogue Lawyer by John Grisham 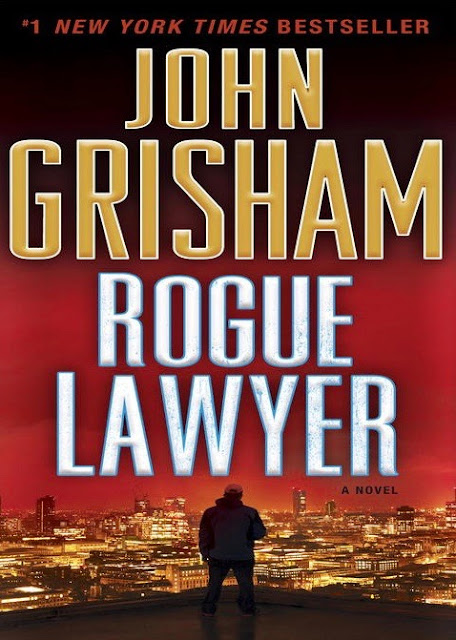 Whenever I finished reading a book from OverDrive, I quickly looked for another.   Because of new restraints imposed by greedy publishers, it is now much more difficult to find a book that is immediately available for download on OverDrive, most books now have long waiting lists, but fortunately, I discovered that most of the older John Grisham novels were readily available, so I read a handful of them since March.

The one I liked the best was The Rogue Lawyer.   It tells the story of Sebastian Rudd, a much hated lawyer; hated because he took cases and defended people who the public despised.  Rudd took those cases because no other lawyers would defend them.  As a result he was often assaulted, his life threatening, and his office shot at and burned.  These actions caused him to live in a different place every week, and work out of a van that he used as an office.

One of the fascinating things that really made the novel memorable was one of his cases in which he defended a retired man whose wife was murdered by a police squad.  Even though Grisham wrote this novel in 2015, this case of police murder is eerily similar to the Brionna Taylor police murder that happened this summer.

The police SWAT team were all macho and gung-ho, decked out in their military style garb, and using military-style automatic weapons.  They had a “no knock” warrant and bashed down the front door in the dead of the night.  When they battered down the door, the retired couple’s dogs, who were asleep in the living room, started barking, so were shot by the police, the gunfire and commotion causing the retired owner of the house to think he and his wife were being attacked by a gang.

He grabbed a gun and shot at the intruders in his darken living room, wounding an officer.  The rest of the SWAT team then opened fire, killing the wife.  When the dust settled and the police realized what they had done, instead of admitting their mistake, they used the media to paint the retiree as a drug dealer and cop shooter.  Rudd took up the retired man’s case against the police.

I found the fact that Grisham was so well versed in crime and law to imagine a situation which was so similar to an incident that happened years later, to be pretty impressive.   The cases the lawyer becomes involved in brings the reader in contact with a lot of characters they wouldn’t want to meet in read life, making The Rogue Lawyer an engaging book to spend time with.

Posted by Life in BC's Robson Valley at 09:54 No comments: