A Long Night of Too Much Love 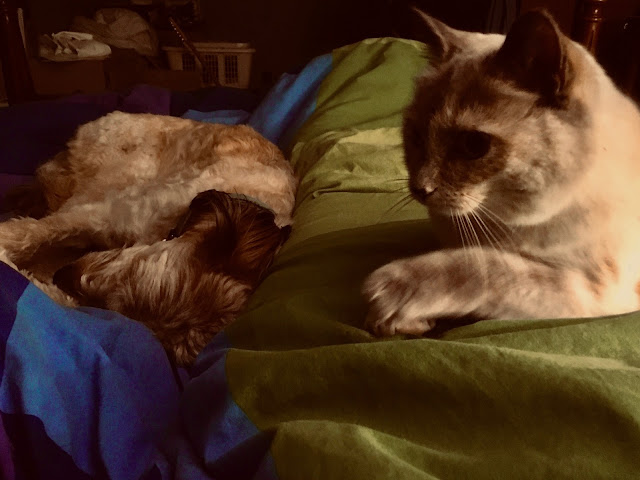 Normally when it is time to go to sleep, Kona our dog shuffles over to her big round dog bed, circles around in the middle, then sinks down and sleeps.  Last night for some reason instead of doing that she jumped up on my bed, made her circle, then collapsed into sleep there; tight against my legs.  That was alright, I figured she would soon awake, jump down, and retreat to her bed.   She didn’t, she slept tight against me all night long.

This didn’t sit right to Lucifer, our cat.  During the night, she likes to periodically come, jump up on the bed, and sit on top of me for some pets.   In the middle of last night when she did jump up, she was a bit tiffed when she noticed that Kona was there.  She lay on top of me, and I gave her more than the usual amount of pets because I didn’t want a dog/cat fight in the middle of the night in my bed.

As Lucifer sat on top of me, she soon decided to push her rights to me a bit further.  She quietly climbed off of me, down onto the side where Kona lay, then with cat feet she quietly inched very close to the sleeping dog and once positioned, she also plastered herself tight against me.

So there I was with two animals snuggled against me and I didn’t want to make any move that might  cause a ruckus, so I just lay there, as still as I could, and tried to go to sleep.  After a long, long period of not sleeping or moving, my body started complaining that it had to change positions.  As slowly as I could, I rolled over onto my side, while the sleeping dog and cat adjusted to my new position.

Normally I have to get up to visit the washroom in the middle of the night, but because of my situation I held off, but by 5:00 AM, I could hold off no longer.  I just threw caution to the wind, raised myself up, turned on the light, and watched Lucifer scramble from the bed, leaping onto the table and my open and empty guitar case for safety.  Kona then leaped off the bed, followed me downstairs where she indicated that she needed to go outside, so instead of going to the washroom, I put on my coat and boots and accompanied Kona outside where we both did what needed to be done under the stars.

Once back in the bedroom, I took my previous sleeping position, as did Kona.  After I turned out the light Lucifer jumped back onto the bed and re-took her previous position.  This was the way it was until 7:00 when I woke up ( I guess I must have gotten some sleep) and we all got out of bed.

I confess, I didn’t feel very rested as I faced the morning after my night of love.