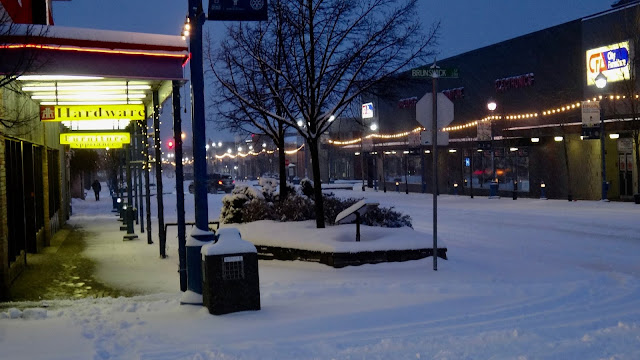 Normally when we drive up to Prince George, it is a one-day whirlwind; two and a half hours up, then some shopping followed by another two and a half hours to drive returning back to McBride.  Because I don’t like driving in the dark, during the winter with the shorter days, we have less time to do the shopping.
I had a five hour service for the car scheduled in PG, so we drove up the day before and overnighted in a motel so we could get the car worked on first thing in the morning.  There were all kind of snow storm warnings for the night and they materialized, so Prince George was covered with about 9 inches of the white stuff when woke up and I drove the car to Subaru in the morning.  I slogged through the snow on the uncleared sidewalks, back to the motel in the vacant city after delivering the car, and that is when I took the photo.
It was a long day for us.  After breakfast we re-slogged back to Subaru to take advantage of their shuttle service. We thought we’d have them drive us to Pine Centre, where we could wander around in the Mall to kill some time.  We hadn’t been to the mall for a long time, and quickly discovered why: there just weren’t any stores there that interested us.
We initially stopped going to the mall because it seemed that it was mostly clothing stores, something that we didn’t care about.  This time I found that most of the stores were now dedicated to mobile phones and their accessories, which again didn’t hold any interest for us, so we almost immediately decided to confront all of the snow and shuffle out to the bus stop and catch the bus to Costco.
It was the first time we had used the PG buses, and it worked fine, although where it stopped meant we had to walk a distance through the snow to get to Costco.  Once at Costco we felt more at home and we ate our lunch there and then took our time strolling through the aisles and sampling the food.
After a couple of hours, we had the Subaru shuttle pick us up and we spent the last hour sitting in the Subaru lounge waiting for our car to get done.
It was dark when we arrived back in McBride, but at least the highway was in fairly good condition.  Luckily the predicted bad weather that was forecast for our drive back didn’t happen.  We were eager to pick up Lexi from the kennel where she had to overnight.
McBride had a big dump of snow during our absence but we were able to get down our driveway which had a foot of heavy snow covering it.  After we unpacked the car, ate, I spent a couple of hours with the snowblower and shovel trying to clear my driveway.
It had been another one of those memorable times in Prince George.