Snow Flower and the Secret Fan by Lisa See 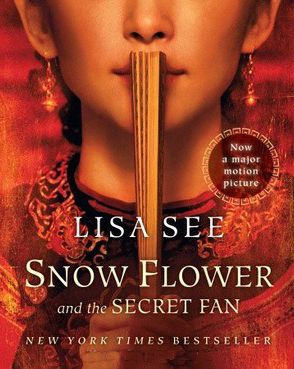 ''Snow Flower and the Secret Fan by Lisa See
This novel is about the contracted friendship between two Chinese girls that begun when the two were six years old.   This special relationship was created because the girls had eight things in common, things like the date of their birthdays and the death of a sister.   They were however different in that Snow Flower came from a prominent, wealthy, and cultured family, while Lily, who is the narrator of the story, came from a poorer farm family.
The two girls would meet several times a year and those visits resulted in an intense bond between them.   The most memorable and horrific part of the novel began when the girls were seven, that is when their feet were bound. I found this event very distasteful, due to the agony the young girls had to endure and the stupidity of the practice that could kill them, or if they were lucky, just semi-cripple them.
At the time, Chinese women with some wealth had to spend most of their lives in an upstairs room with other women.  Women had a secret written language called nu shu, and the two “sames” in this novel, would communicate by using the language written on a fan that was passed back and forth between them.
The novel follows the struggles of Lily and Snow Flower’s lives through girlhood, marriage, and all the way to death, through reversals of fortunes, good times, and a period of near starvation.
While well written and interesting, I will always remember this book for describing the barbaric practice of foot binding.
I found it curious that every time the word “cash” was used in the novel it was italicized.

To see my paintings, visit:  davidmarchant2.ca