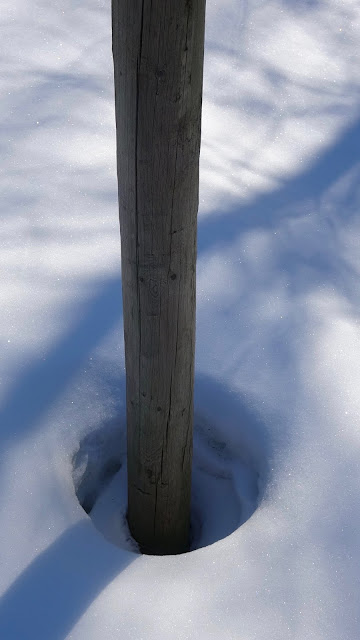 See the hole formed around this fence post.  That is called a “tree well” (although technically this one should be called a “post well”).  Tree wells can be very dangerous and even fatal to skiers, snowshoers, and hikers, if they accidentally fall into a deep one under a tree.  Up in the mountains in really deep snow, tree wells can be up to 20 ft (6m) deep.
Every year in North America people die when they fall into deep tree wells and can’t climb out.  Often in such accidents the victim falls in head first and can be knocked unconscious by the tree trunk or striking the bottom.  Other times the banks of the tree wells are just too steep and slippery for the victim to climb out of.  Another hazard is that in their attempts to climb out, victims sometimes loosen the snow on the sides causing the surrounding snow to collapse on them, which can result in their suffocation.
In an experiment 90% of the volunteers could not climb out of a tree well.
The tree well in the photo is only a foot deep (30cm) so it presents no problem, and I think it is beautiful with it’s graceful curves, but in deep snow they can be extremely dangerous to those that aren’t aware of the potential danger they can create.