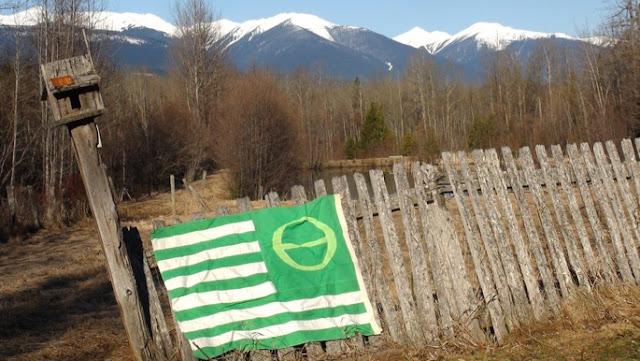 So here it is 50 years since April 22 was designated as “Earth Day”.  It was created to celebrate and appreciate this isolated rock that gives us life, twirling in the enormous void of space.  I participated in that first Earth Day.  At the time, I was full of hope that humankind would finally see how extremely important this home of ours is and would start doing things to help save it (and us).
The environmental movement was very much in its infancy back in the very late 1960’s.  You didn’t hear much about nature sciences,  but I was extremely interested, and after returning home from Peace Corp training, I enrolled in two biology graduate courses:  “Evolution” and “Ecology”.  It was in 1970 when I was taking Ecology, that I began hearing about the proposed “Earth Day”.
My professor was motivated to organize a Earth Day celebration at the University of Evansville.  I helped with the event, and somehow convinced my mother to sew up an “Ecology” flag, that could be flown during the celebration.  I had seen an image of the flag somewhere and drew it up for her to use as a pattern.  As you can see, I still have the flag (Photo).  It is something you don’t see any more.  It never really caught on as a symbol.  There is an “Earth Flag” that is a bit more common now.
Back then there was some reason to be hopeful.  Even most Republicans seemed to be on the same page.  President Nixon after all, set up the EPA (Environmental Protection Agency), but Big Oil had another agenda and began secretly pouring money into a disinformation campaign attacking science.  It was wildly successful, and that encouraged other extraction industries to do the same.
Now a huge segment of the US no longer believes in science, instead believing in Trump, Alex Jones, Fox News, and Russian Hackers.   “Everything is fine, we can go on living like this forever,” they exclaim, anything else is “fake news.”
Any rational person that objectively looks around at what is happening to our planet, can plainly see reality.  Fifty years after its creation, Earth Day has become a sad reminder of our failings.
Sorry, I try to stay away from politics on this blog, but ever so often I just have to vent.