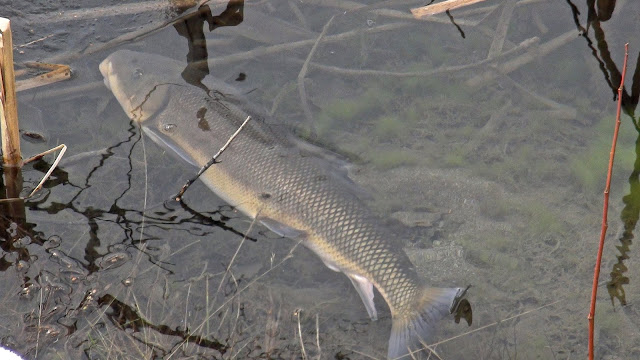 Bob loved to fish, and seemed interested when I told him about the pond I was having dug.  A couple of years later, I was surprised one weekend afternoon when he stopped by the house.  He had been out fishing and had a gift for me:  several “whitefish,”a couple of “Suckers”  and a couple of trout; all alive.  He had caught them and he brought them so that I could put them into my pond.  I didn't really know anything about these fish, all I had ever put in my pond where just some shiners: minnow sized fish.
We put them into the pond, and years passed.  I had assumed they had all died because I never saw any sign of them.  Nothing ever jumped out of the water to catch an insect, and I never saw any eagle swoop down to grab a fish, or see any big fish dart away in the clear water of my pond, but despite their invisibility, some of them were still in there living.
A decade or so later, I was surprised on two different occasions to see one of Bob's fish in the pond.  One was dead and floating near the shore, and the other was alive and under the water near our waterline outflow (See photo).  I am not sure if anymore are still in there or not, but I often think of Bob unexpectedly bringing them over for my pond.
These are the memories of Bob Elliot that I carry around.  I'm sure there are many more that will resurface in the future.  I really enjoyed knowing and working with him throughout the years.

You can look at my paintings:  davidmarchant2.ca