Back to Using Our Old Stove 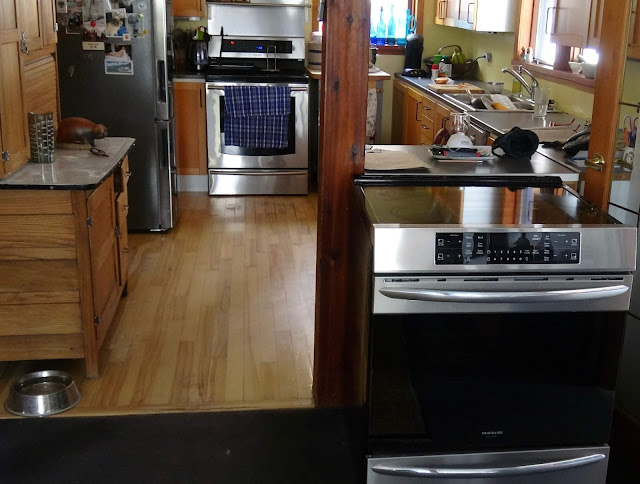 Back on my Jan. 29th blog I mentioned that our old range had started giving us error messages about it’s fan failing, and that we had bought a new stove to replace it.  Well, our new Fridgidaire Induction Gallery stove was a disaster. (That is it sitting in the foreground of the photo above.)  Our initial excitement at having a new expensive  stove was quickly dampened as we began to use it.
We would set the temperature, say 400, the stove’s display would show the temperature rising in increments, then beep when it said 400.  We would put the pizza, or whatever it was that we were cooking in the oven, but we discovered that even though it was something we had made thousands of times, it wouldn’t get done.
We then began to put a thermometer in the oven and discovered that the actual oven temperature was never what it said on the display.  The actual oven temperature could be out by anywhere between 10 and 40 degrees.  This would happen whatever we tried to bake.
We were extremely unhappy after paying such a huge price for something we thought would give us a precise temperature.
We called our local hardware store where we had purchased the range, and they sent a guy with technology experience out to check it.  He had us record what was happening for two weeks, which we did.
Every time we used it, the oven temperature was wonky.  If you needed 400 and the oven said 400, but our thermometer in the oven said 360, we would turn off the oven, and set it at 450 to try and get an actual 400 temperature.  When the oven was turned off then turned on again, the display would instantly give us the actual 360 temperature that was in the oven.  We were full of frustration and anger.
We finally gave up on our new range and moved it out of the kitchen.  Luckily we still had our old Samsung stove with the fan error, and we moved it back into the kitchen to use.  It would sometimes give the fan error message and turn off, but at least it gave us the correct temperature that we needed in the oven.
Yesterday the hardware store came and picked up the Fridgidaire range and gave us our money back.  I don’t know why it didn’t work correctly.  Was it made on a Friday afternoon?  Was it damaged in transit? or was it just a lemon?  The model had gotten good reviews, but it sure didn’t work for us.  We were very happy to see it being driven away on the back of the hardware store pickup.

You can view my photo-realistic paintings at:  davidmarchant2.ca
Posted by Life in BC's Robson Valley at 09:23