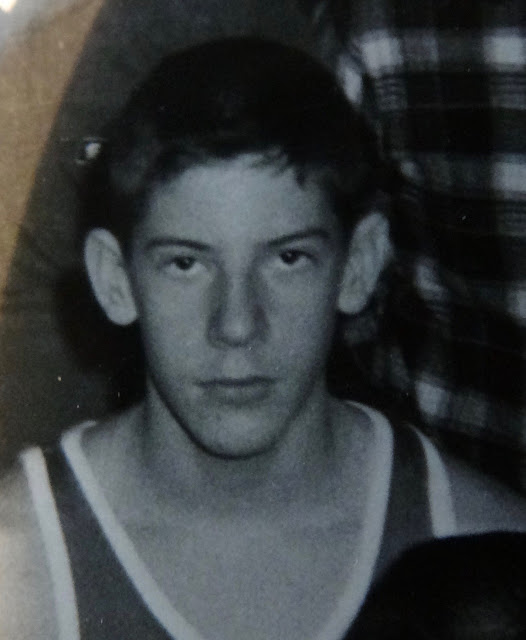 After school, holding my parents permission slip, my doctor's okay, and all my track gear in my arms, I joined the other potential track stars and headed down to the boy's dressing room.  Once dressed, and out on the field, we were given an explanation of all the events--50 yard dash, 75 yard dash, 100 yard dash, the 200 yard run, and the relays.  Then there were the field events: high jump, broad jump, pole vault, and something called the "hop, step, and jump".
After weeks of sprinting, hop, step, and jumping, and practicing handing off the bamboo "baton" in relay races during our after school track practices, the team that would represent our elementary school was chosen, and it was decided who would participate in which events.  Eleven year old, David Marchant was to broad jump, sprint in the 100 yard dash, and run the final leg of the relay.
I don't remember a whole lot about that first track meet which was the District Track meet for schools on the north side of town.  We did get miss of half a day of school,which was a big deal.  We boarded a yellow school bus, where we somberly sat pondering, what was going to happen at the track meet, while our teacher/coach tried to motivate us with a pep talk.
When we arrived at the school field where the meet was to take place, we were all given a half of a lemon to suck on for some reason.  I still don’t understand the sucking on the lemon business, but that seemed to be a vital part of participating in a track meet during elementary school, and since I didn’t know anything about track meets, I sucked on my lemon.
When it was time for the 100 yard dash heats, we nervously positioned ourselves on the starting line, and when the starting pistol went off we streaked to the faraway finish line, where the top few finishers were approached by officials, and congratulated, then registered for the finals of the 100 yard dash.
In the broad jump event we all of the participants were given three chances of running down toward the sand pit, taking a leaping when they reached the white board in the ground, then with legs outstretched flying through the air, then landing in the sand.
I performed very well at the District Track Meet, winning in my age class, the broad jump, where I came in first place with a leap of 14' 2".  In the 100 yard dash, I also won, finishing in 12.9 seconds.
The fact that I had placed first in the district meet made me eligible to participate in the Evansville "City" track meet that was held a couple of weeks later.  Again, I and two other boys who had also placed in the top 3 in track and field events at the district meet got to get out of another afternoon of school.
The City Track and Field Meet was held in an intimidating old brick football stadium, whose size and status, made us gulp as we entered the structure.  Again we were given lemons to suck on.  We stretched and jogged around the track secretly looking at the competition as we waited for our events to be called.  The district track meet had been an all "white" affair, because all of the schools in our district schools drew on rural and country families, all of which were white.  The City Track Meet was a much bigger deal, it included all of the feeder elementary schools to the four big high schools.  These schools that drew students from the inner city and black neighborhoods, where so many of the really talented athletes grew up, so the competitors we were going to face would be a lot more talented.
They were.  I wasn't even able to place in the broad jump, but in the 100 yard dash, no one was more surprised than I was when I in first.  I guess sucking on those lemons really worked for me.  Of course, I was very proud and surprised at what had happened.
When we got back to our elementary school, and I told my dad, who was was waiting there to drive me home, he was also very proud of me.
On the next day when I got off of the bus at school, word of my achievement had gotten around and I was treated like a big star, and that was quite an ego boost.  Of course my five minutes of fame came with a down size; just like the “fast gun” in all of the cowboy movies, everybody wanted to try and beat me.  Even my sixth grade teacher wanted to race me.
Above is a photo showing what the athlete starring in this epic looked like.  Below is part of an old newspaper article recording the results of that first District Track Meet.  In looking over it just now, I discovered that I got to know a lot of the participants later, when we all became students in same high school. 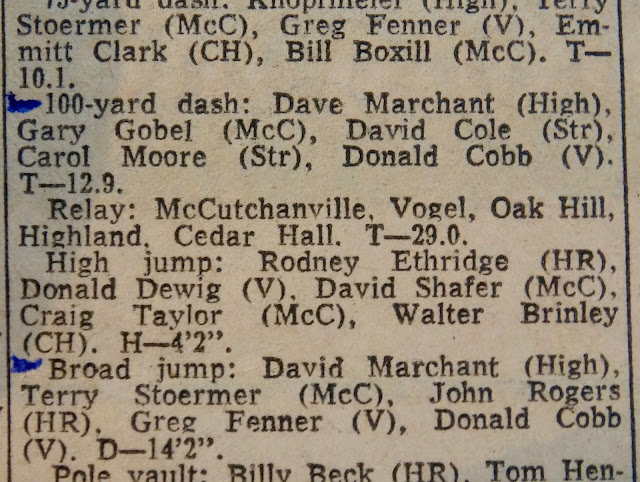