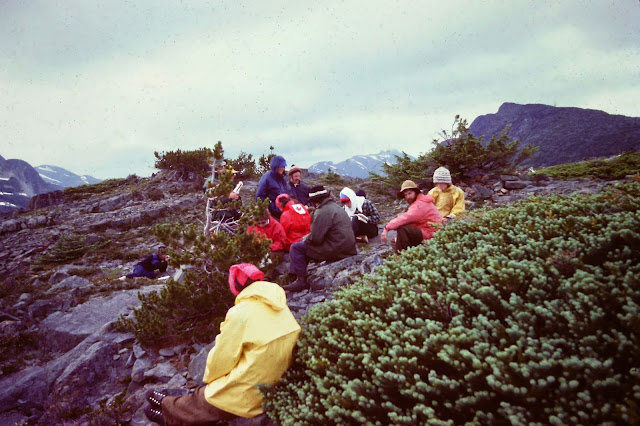 In 1976 we had been living in BC for three years.  We had driven through the Canadian Rockies, and had camped there, and we had ferried to Vancouver Island and been to Victoria, and had visited some of the sights along the coast, but I really didn’t know British Columbia very well because just about all of our time here we had been living in an isolated logging camp in the middle of the province.
During my last year of teaching in the one room school in the camp, I came across something that peaked my interest in one of the teacher publications.  That summer there was to be an Outdoor Education course for teachers called “Alpine to Ocean.”  The two week workshop was to feature backpacking trips, camping, and talks in both Alpine areas and along the BC coast.  It was sponsored by the Ministry of Education and its fee was partially subsidized by the Ministry.
Wow, I thought, that sounds like something I would really enjoy taking, so I signed up.
The workshop was centered at the Strathcona Park Lodge on Vancouver Island.  To get there I had to take several buses, and finally hitchhike.  My travel time took me close to 20 straight hours, and I was pretty tired when I arrived at the lodge.  It was a friendly group of 15 people involved in the course, and our first trek was up into the alpine on the slopes of Mt. Albert Edward.  It was a grueling slog up the steep slope which caused one of our number to faint, then be taken back to the lodge.
Although I had always been interested in backpacking and had all the equipment, I had never actually done any, that is, carrying all my food and shelter on my back and being dependent upon what I brought.  I wasn’t the only participant without that experience, so climbing up the slope meant a lot of rest stops to let our legs and backs recover.
The alpine is a harsh environment with its short growing season, cold weather, and strong winds.  It is an intriguing place to explore and has its own beauty with its spectacular scenery and flowers.  Unfortunately when we arrived most of the flowers had already bloomed and disappeared, and mostly what we experienced were rock, snow, stunted plants, and heathers.
Our “official” time was spent listening to talks about the alpine environment, setting up our camps, and fixing our meals, but after that we were free to visit, explore the alpine, and even take a cold swim in a pool of water mostly surrounded by snow.
This first real introduction to alpine, really wetted my appetite for more alpine experiences, and later when we moved to McBride, exploring the mountain tops that surrounds us, is something I always enjoyed doing. 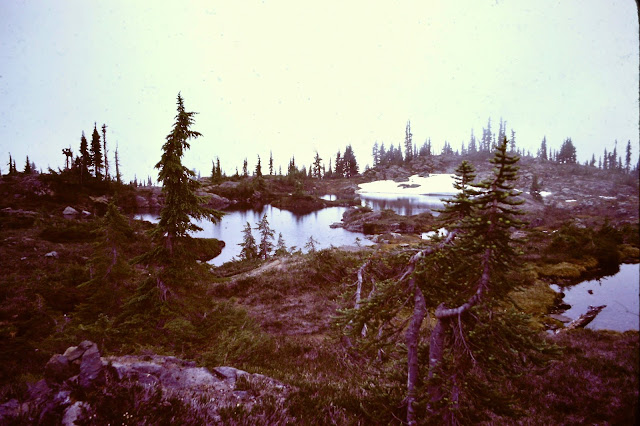 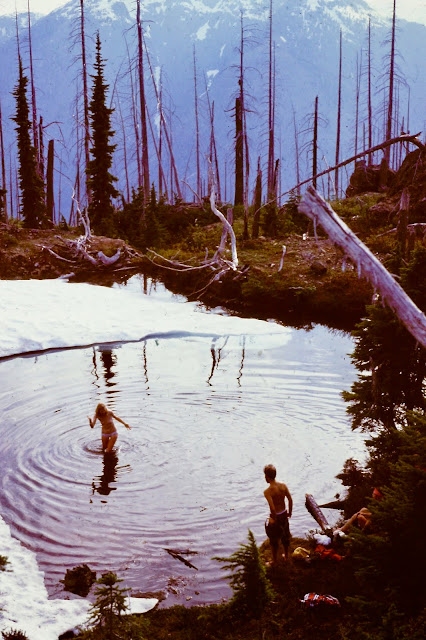