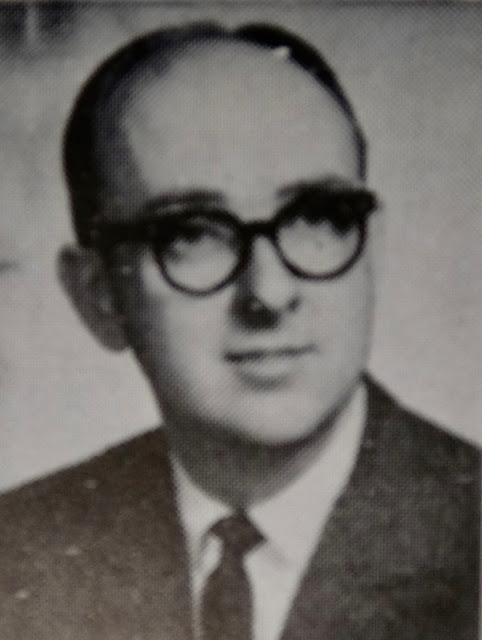 In my regular Sunday phone call with my family, I was told that Jerry Hoover, my high school music teacher had died.  I feel like I owe him a huge amount of appreciation for all the work that he did for his students.
He was not one of those teachers that I loved, I liked him okay.   He was not one of those teachers that inspired me so much that I wanted to be like him and become a choir teacher.  No, he was just one of those teachers that did his job effectively, and created numerous extra-curricular events that enriched the high school experiences for his students.
After “graduating” from my neighborhood elementary school, I was ready to move into a much bigger high school.  It was a pretty intimidating prospect to be thrust into an unfamiliar environment where I didn’t know most of the students and teachers.  I assume I had a choice of elective subjects that I could take in high school.  I loved art, and now I don’t really remember why I didn’t take art classes, but it was probably recommended that I take chorus.  As it ended up, that choice really made a big difference in my high school experience, and I think my life.
So in my freshman year I ended up in the Freshman Boy’s Chorus.  I think the class was a bit of a dumping ground for male students.  There were a lot of boys in there that couldn’t really sing very well,  but I had had years experience singing harmonies in our church choirs, both junior and senior.
The Boy’s Chorus was a very easy class, we would just learn songs, harmony parts, and sing along as Mr. Hoover played the piano.  As we approached the first grading period, we suddenly learned about a terrifying ordeal that each of us had to go through.
Mr. Hoover would call four boys up to the front of the class to stand by his piano; a first tenor, a second tenor, a baritone, and a bass.  He would play a song and the four would have to sing their harmony parts to the song.  It was terrifying.
I was a bass, and when my name was called along with three others, I was full of fear.  Mr. Hoover  began playing and the four of us began to sing along.  When we had finished, a really unexpected and remarkable thing happened.  Mr. Hoover praised me.
He told the class how well I had sung the bass harmony part.  He then had me sing it again by myself as he played through the song again. I didn’t possess a “solo” voice, but I had a solid voice that could sing and hold harmony parts.
This event led to me, along with a small handful of other freshman boys, to be put into the Concert Choir the following year.  The Concert Choir was normally reserved for Juniors and Seniors.  Being in the Concert Choir hobnobbing with upper classmates, elevated my status, which was so important to teenagers.  Being in Concert Choir really gave me a boost of confidence that had been really lacking in my personality.
Although I had always been a big fan of music that had led me to pursue it on my own, being in the Choir introduced me to a much wider range of music than I knew about.  We sang classical pieces including “The Messiah”, and we did show tunes, most of which I were unfamiliar with.  Being in the Choir also led to me being in our high school’s spring musicals.  I was in “Brigadoon”, “My Fair Lady,” and “Oklahoma”.  I was not only in the plays’ choruses, but also was a dancer, and had a few speaking lines.
The Concert Choir also sometimes did “tours” that took to other towns and cities.  The most memorable of these was in Indianapolis.  It was memorable not because of our performance, but because as we sang at various high schools, some of the students from those schools started to tell us that President Kennedy had been assassinated.  For a while we believed that they were just trying to pull our legs, but finally we were forced to accept it, and our trip back home was quite subdued.
Looking back at my life and remembering those wonderful high school experiences, I realize just how much that Mr. Hoover had done for me.  I certainly didn’t realize it as a teenager, but I owe him a lot, both musically and in the development of my personality.
Here’s a belated Thank You, Mr. Hoover.

Below is a photo of the 1965 Concert Choir and a staged shot of me playing the banjo as “Banjo Sam,”  a very minor role in our high school’s production of “Oklahoma”. 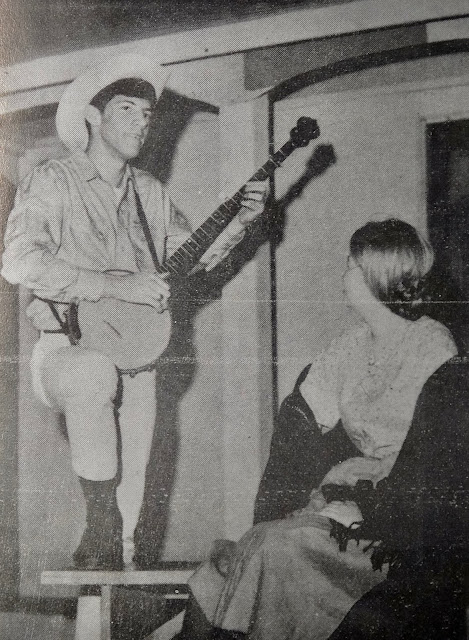