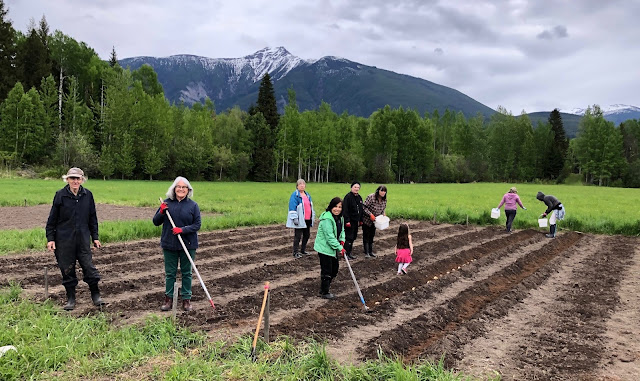 For the past few years, McBride’s Community Garden group has been growing potatoes to sell as a fund raiser.  Last night, potato planting volunteers gathered at Vern’s to put the seed potatoes into the ground.  This is the second year Vern (that’s him on the left) has volunteered the use of his land for the potato growing.  Not only did he allow his land to be used, he also had taken the time to hoe out the trenches, so that all we had to do was to drop in the potatoes and cover them up.  It took less than an hour for the group to plant over 500 spuds.
The planting was originally planned for last week end, but rain had caused a postponement, and we were called to say that the planting would happen on Weds. evening at 6:00.  So on Wednesday, I loaded up my hoe and rake and headed out to Vern’s, but when I arrived (ten minutes early) no one was there, not even Vern.
Thinking maybe I had gotten the time wrong, I sat there in the truck until 6:30, and still no one showed up.  Rather peeved, I drove back home.  The next day, I learned that a message had been sent out again postponing the planting until Thursday evening.  Unfortunately, it hadn’t been sent out to me.
At any rate, there was a good crowd on hand for the planting last night, and things went smoothly and quickly.