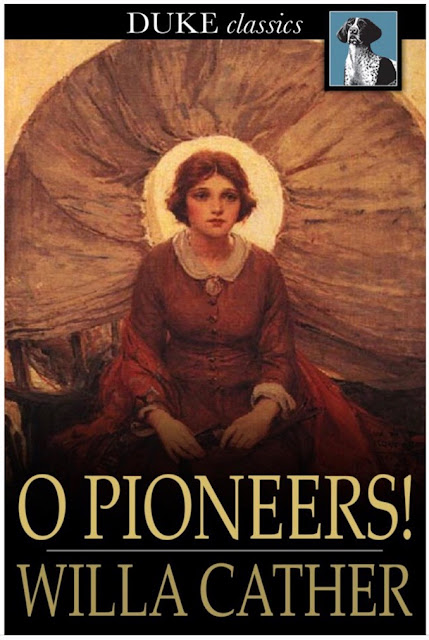 This is the second book I have read by WIlla Cather, a rather unrecognized and under appreciated American author.  Having read and enjoyed Cather’s  My Antonia., I thought I would try O Pioneers!  and like her My Antonia, this novel was thought-provoking, well-crafted, and engaging.

The book which is about early agriculture in the prairies, starts out with all of the main characters as children.  Alexandra the protagonist, has two oafish older brothers, and Emil, a sensible younger brother.  Their Swedish immigrant family has struggled to scratch out crops on their farm located on the harsh unforgiving Nebraska tableland near a small town.

Their agricultural efforts haven’t produced many positive results and their father, who has struggled to make the farm work, lies dying.   While most of their neighbors have given up, abandoning their farms to retreat to an easier existence in the cities, Alexandra’s dying father still believes there is wealth in the land and recognizes Alexandra as being the smartest of his children, and makes her promise to keep the family’s land after his death.

Alexandra with her intellect and modern thinking, innovates and invests, buying up the parcels that her neighbors are abandoning.  She begins planting clover and then wheat which thrives, instead of planting corn which generally failed.  The farm and her brothers prosper under her guidance.   When her brothers married, she generously divided up her acquired land, so they can each run their own farms.

During Alexandra’s rather lonely life she has had one soulmate; Carl, an ex-neighbor, whose family had moved away during their youth.  Years later, Carl, whose city life has been rather unsuccessful, revisits forty year old Alexandra on his way to the goldfields, and her older brothers, fearing her marriage, try to strip her of the ownership of the family farm, which she had saved, turned profitable, and where she lives.

O Pioneers! is a beautifully written piece of literature that immerses the reader into the hardships, human frailties, and loneliness of those prairie pioneers.  Cather’s story paints a picture of those hard times, the people, and the situations in a way that stick with the reader.

The cover of this e-book edition must have been chosen by someone who hadn’t read the book.  There are no covered wagons in the novel, it takes place on an already established farm.