Fifty years ago today I was in Washington DC along with 500,00 other people who had gathered to show their opposition to the US sponsored slaughter in Vietnam.
At that point in my life, I had left the Peace Corp because of language difficulties and the sense I got from the instructors I most respected, that the Philippine teacher seminar program I was being trained for was basically just a sweetener for all of the US military bases there.  It would not help to solve any major problem they were having.
When I decided to leave the Peace Corp I vowed to myself that I would try to do more to try to end the senseless killing in Vietnam.  I wrote letters and worked as a Draft councilor to provide males of my age, information about their rights and options as far as being drafted into the military.
When I heard about this peace march in Washington, I was eager to be a part of it.  I naively believed with so many people going to Washington, Nixon might recognize what massive opposition there was to the Vietnam War, but he still had his flag-waving base, and ignored us.
I traveled overnight on a bus with others from my home town to get to Washington DC.  Once we had arrived I was amazed at how many people were there to demonstrate against the war.  It is still considered the largest demonstration ever in Washington DC.  The crowd was so big, I didn’t really know what was going on, I just followed with them as the crowd moved along.
There were speeches and music (Pete Seeger, Peter Paul and Mary, John Denver, and Arlo Guthrie) but I didn’t see or hear any of it, because my section of the crowd was still probably a mile away from where that happened.
I spent the night sleeping with others in one of the many school gyms that were open to provide shelter to the demonstrators. The next day, boarded a bus to return back home.  It was a whirlwind weekend trip.
Even though all I did was march with the thousands and thousands of others who felt the same, today; fifty years later, I am very proud that I was there, and although the march didn’t end the war (in the following years, thousands and thousands more were destined yet to die, or be physically and psychologically maimed for Nixon’s politics), at least I made an effort to stop the madness. 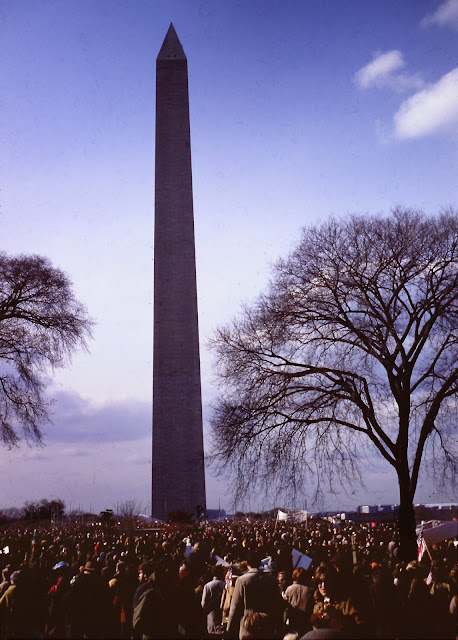